Thank you, Prime Minister, thank you Denys, for receiving me. I was recalling that you and I met in this same building, many many months ago, early on in this war. And it is a great privilege for me to be back. Thank you very much indeed.

I was fortunate to visit Mykolaiv and Kherson earlier this week, and now also in Kyiv meeting the Prime Minister and other leaders, as well as humanitarian agencies. And I'd like to share a few conclusions from those visits and from those meetings.

Firstly, I was very impressed by the close partnership which the international humanitarian community, which is what I represent, has with your authorities, with your Government here. But also very importantly in the oblasts, the government of Mykolaiv and Kherson. I spent time with the mayors of those two cities, the heads of hromadas also. And that relationship is extremely strong, but it's very operational. Needs are identified. Aid is delivered.

And I want to thank you, in fact, for what everyone has been telling me from the humanitarian agencies, international and national, local, the fron- line partners, to thank you for the very, very constructive and open relationship we have, even in these extraordinarily difficult times where you all days are filled with decisions and tragedies. You have provided the time for our agencies and our partners to do that job. It is a huge thank you.

Since the beginning of the war, international humanitarian agencies have reached just under 14 million people with assistance, and we will continue to do so under your leadership.

But let me say a few things about Mykolaiv and Kherson.

We were in Kherson, as I said. The Governor was spending the day with us, the mayor, the people. We saw distribution sites for food, shelter, clothing, mattresses, all organized by local authorities, handing out these small bits of generosity to the people in their great time of difficulty. I was in a school where UNICEF has a child centre. And as we were there in Kherson, we heard the artillery coming closer to us. So the shelling, which is a daily phenomenon in Kherson, we heard that. And it's not that we were under threat, but we were reminded of these still uncertain lives and future of so many people, even in Kherson, where you have managed to regain so much of your territory.

We met in Mykolaiv, in a shelter provided by your Government to the displaced people from Kherson, some of these families. Some of them have been there for months, but some had recently arrived because their villages on the road between Mykolaiv and Kherson had been destroyed. And the following day we saw those villages, and they went back daily to try to restart their lives in those villages.

They didn't know when the reconstruction of their houses would happen, and it was a reminder of two things. One, you have an enormous challenge ahead to reconstruct the places where people live. But equally, you have people who want to go home, who are determined to go home. And that is a great value and a great tribute to your people.

And in many parts of Kherson there is very little electricity. So, the effort that you were making in Paris on the same day, Denys, that is, making the repair of energy infrastructure the absolute central priority is one that I saw how important it was to the people of Kherson. And the Governor of Kherson is trying to amend the electricity lines coming into his oblast and hoping that if they were repaired, that they would not be damaged again.

This issue is of central importance precisely because civilians suffer from the lack of electricity, civilians who should not suffer under international law in a conflict. That's the first priority.

The second is de-mining, and we talked about it just now. I was told, for example, that there are about half a million hectares of agricultural land in Kherson alone, which needs de-mining. You can't get the country back into production without de-mining. I think, as you were saying to me earlier, Ukraine is probably now the most mine-polluted country in the world. So the urgent international priority to the mine is one that we will also do what we can.

And then finally, this and we talked about it also. Even in war, people want to see a future, perhaps, particularly in war. And restarting elements of a local economy is a central priority for people. People want to go back to work. They want their children to go back to schools, they want transport to work. They want the economy to work, they want employment to happen. And I am one of those who supports you in your efforts to get that private sector back. Even now, even in places like Kherson, where the war is still going on with those people on the right bank are still being shelled every day, restarting, jumpstarting the economy, anything that we in the UN can do to support that effort – we’d happily do so.

Thank you very much. 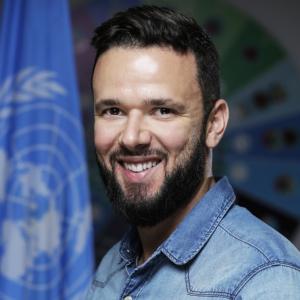