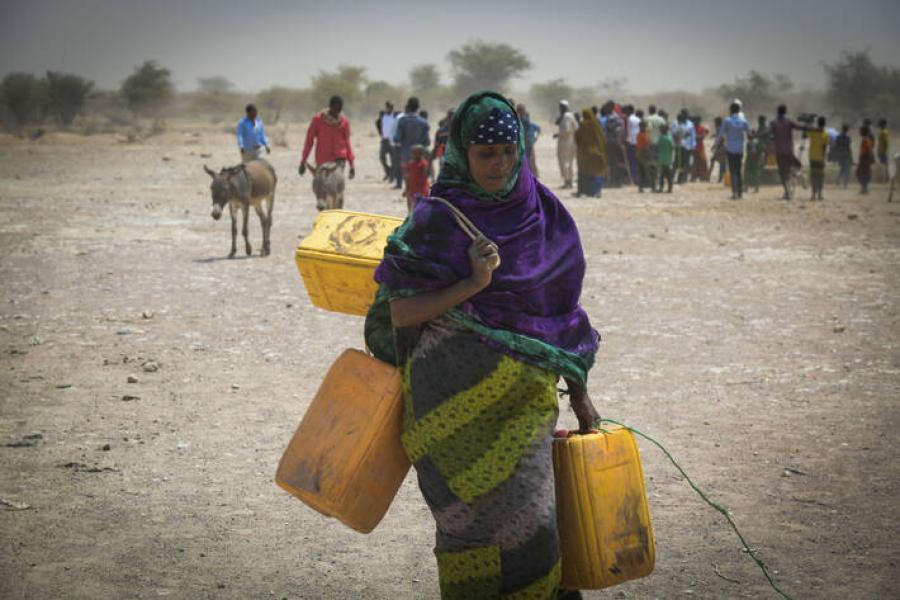 18 March 2021, Rome - Agriculture absorbs the bulk of the financial losses and damages wrought by disasters which have grown in frequency, intensity, and complexity, says FAO in a new report released today.

At no other point in history have agri-food systems confronted with such an array of new and unprecedented threats, including megafires, extreme weather, unusually large desert locust swarms, and emerging biological threats like the COVID-19 pandemic. These hazards not only take lives but also devastate agricultural livelihoods and inflict cascading negative economic consequences at the household, community, national and regional levels that can endure for generations, the report says.

According to the report, annual occurrence of disasters is now more than three times that of the 1970s and 1980s. Relative to agriculture, industry, commerce and tourism taken as a whole, on its own agriculture absorbs the disproportionate share of 63 percent of impact from disasters, with the least developed countries (LDCs) and low- and middle-income countries (LMICs) bearing the major brunt of these scourges.

Thus, between 2008 and 2018, the impacts of natural disasters cost the agricultural sectors of developing country economies over $108 billion in damaged or lost crop and livestock production. Such damage can be particularly detrimental to livelihoods of smallholder and subsistence farmers, pastoralists, and fishers.

Over the analyzed period, Asia was the most hard-hit region, with overall economic losses adding up to a staggering $49 billion, followed by Africa at $30 billion, and Latin America and Caribbean at $29 billion.

"The upheaval set in motion by COVID-19 may push even more families and communities into deeper distress," said FAO Director-General QU Dongyu in the foreword to the report. "Disaster impact is pervasive and requires immediate efforts to better assess and understand its dynamics, so that it may be reduced and managed in integrated and innovative ways. The urgency and importance of doing so have never been greater".

The report identifies drought as the single greatest culprit of agricultural production loss, followed by floods, storms, pests and diseases, and wildfires. Over 34 percent of crop and livestock production loss in LDCs and LMICs is traced to drought, costing the sector $37 billion overall. Drought impacts agriculture almost exclusively. The sector sustains 82 percent of all drought impact, compared to 18 percent in all other sectors.

Crop and livestock pests, diseases and infestations have also become an important stressor for the sector. Such biological disasters caused nine percent of all crop and livestock production loss in the period from 2008 to 2018. The potential threat of disasters of this category was rendered evident in 2020 when huge swarms of desert locusts ravaged across the Greater Horn of Africa, the Arabian Peninsula, and Southwest Asia destroying crops and jeopardising food security.

Disasters extend beyond the economic realm having deleterious consequences for food security and nutrition. For the first time ever, this edition of the FAO report converts economic losses into caloric and nutrition equivalents.

For example, it estimates that crop and livestock production loss in LDCs and LMICs between 2008 and 2018 were equivalent to a loss of 6.9 trillion kilocalories per year. This equals the annual calorie intake of seven million adults.

In Latin America and the Caribbean, disaster impacts during that same time frame convert to a loss of 975 calories per capita per day, accounting for 40 percent of recommended daily allowance, followed by Africa (559 calories) and Asia (283 calories).

A disaster-resilient future is possible

Holistic responses and cross-sectoral collaboration are key in the disaster response. Countries must adopt a multi-hazard and multi- sectoral systemic risk management approach to anticipate, prevent, prepare for and respond to disaster risk in agriculture. Strategies need to integrate not only natural hazards but also anthropogenic and biological threats, such as the COVID-19 pandemic, and must be based on an understanding of the systemic nature and interdependencies of risks.

Innovations such as remote sensing, geospatial information gathering, drones and disaster robotics, and machine learning are powerful new assessment and data gathering tools that have much to offer in the quest to reduce disaster risks in agriculture.

In addition to efficient governance, it is crucial to promote public-private partnerships to address the urgent need for investment in reducing agriculture's susceptibility to disasters and climate change.

FAO's recurring report The Impact of Disasters and Crises on Agriculture and Food Security presents the most recent trends in agricultural production loss attributed to disasters across all agricultural sectors. The 2021 edition covers 457 disasters in 109 countries across all regions and income categories, including for the first time upper-middle- and high-income countries (UMICs and HICs).

Of the 109 countries to register disaster-related agriculture loss, 94 are in the LDC and LMIC categories, where 389 disasters hampered agricultural production.